From pizza to pasta to the completely unexpected, these 24 vegan cauliflower recipes are healthy, unique, and delicious. 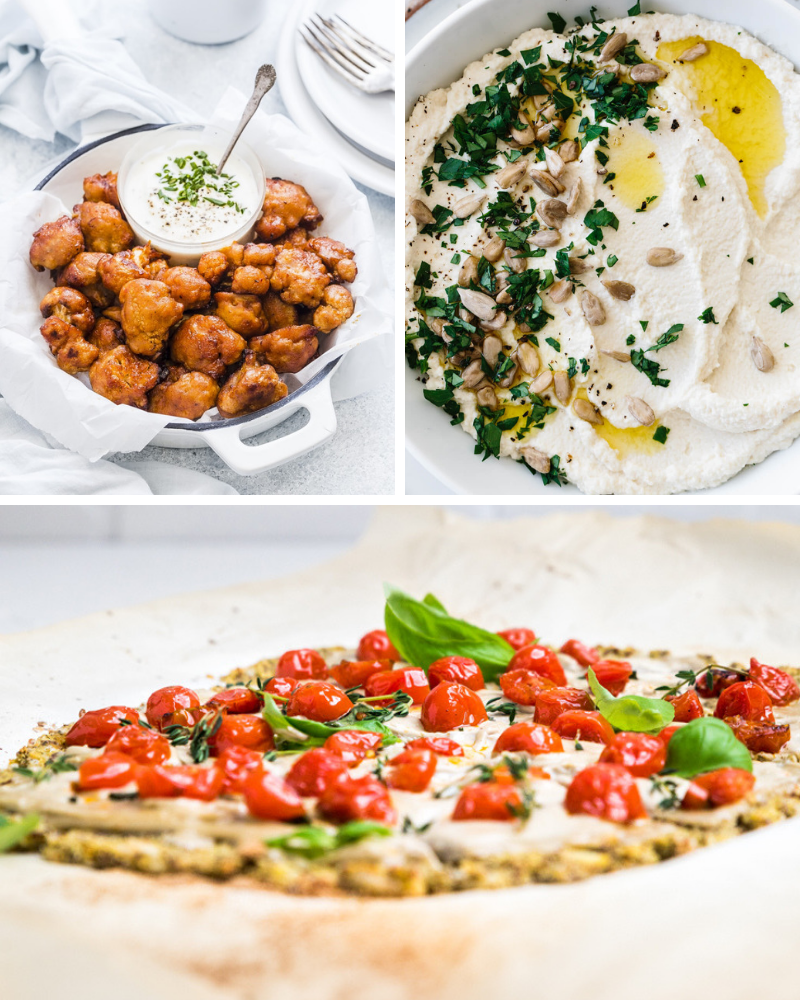 I am not a vegan, but I am a cauliflower fan.

And I’m all for healthier alternatives to my favorite foods.

In fact, I’m going through a cauliflower phase, if you will, at the moment. I’m currently quite obsessed with the Trader Joe’s cauliflower pizza crust, and there’s two different breweries in my town where I pretty much only go to for the cauliflower dishes. One is spicy buffalo cauliflower and the other a crispy, crunchy popcorn cauliflower with lemon aioli. Both are so good.

That’s what inspired me to round up this list, actually. I was on the hunt for some unique cauliflower-based recipes to make at home. Turns out, so many amazing cauliflower recipes also happen to be vegan and healthy, while still remaining crazy delicious. 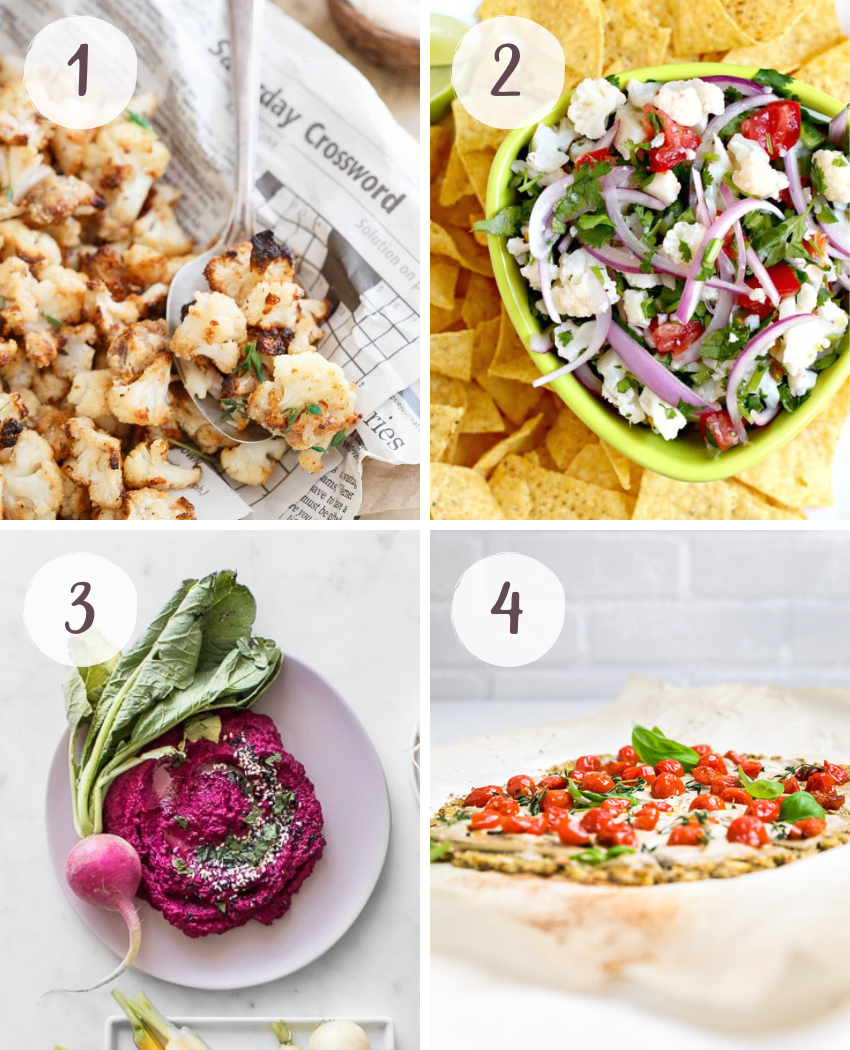 A vegetarian version of popcorn shrimp, this popcorn cauliflower is crispy and highly addictive all while remaining vegan, paleo, and gluten-free. You’ll also love the tangy salt and vinegar spin. via Running to the Kitchen

Who knew cauliflower could replace seafood in ceviche and be this delicious? This vegan, gluten-free ceviche is accented by fresh herbs, spicy jalapeño, and plenty of lime. via Veggies Save the Day

Cauliflower is a popular choice for bean-free hummus, and this one is as pretty as it is tasty. Roasting the cauliflower provides tons of flavor, while the beets make this hummus a pleasant pink hue. The addition of mint? Genius. via Chef Sous Chef 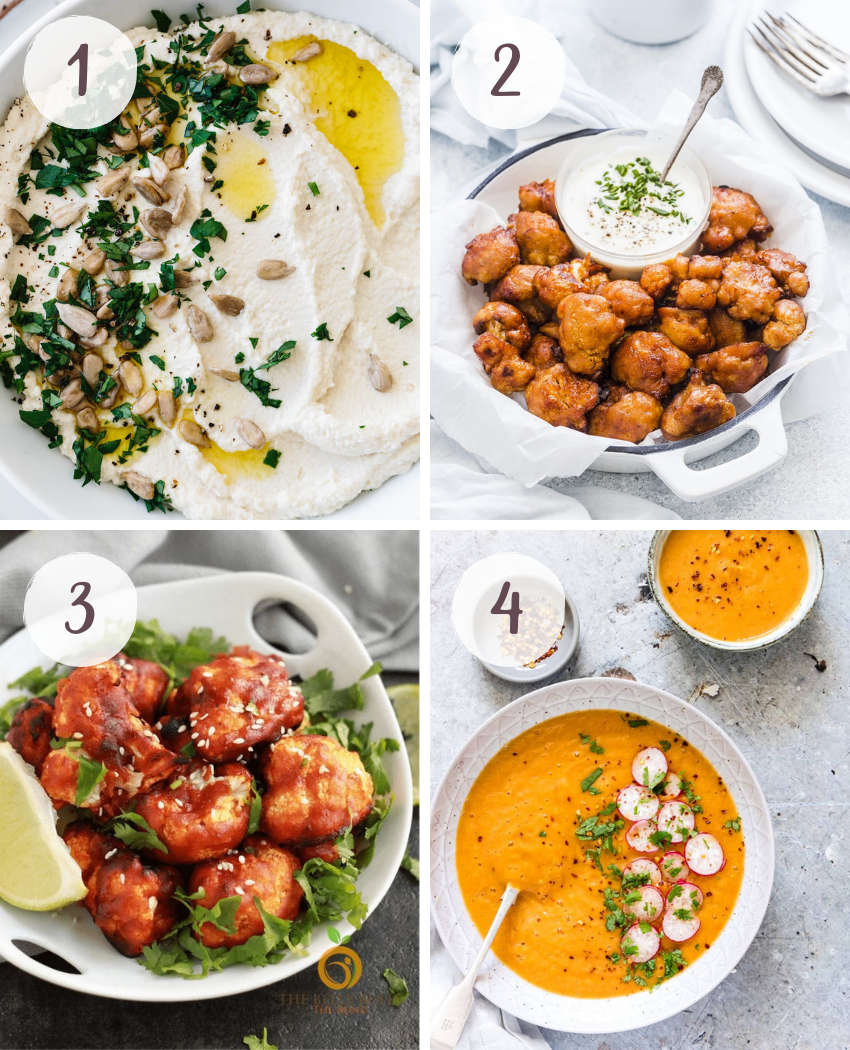 Although we’ve already included a beet and cauliflower hummus, this version is for the purists. This hummus is Keto, paleo, gluten-free, and vegan. It’s also perhaps the creamiest bean-free hummus around. via Downshiftology

One of my favorite meatless recipes for cauliflower are buffalo wings. This version is baked, not fried, and completely vegan while not lacking any flavor. via Sandhya’s Kitchen

For an air-fried version of cauliflower wings, this Cheesecake Factory copycat recipe is a must. The Korean Gochujang sauce is a unique spin from basic buffalo. via The Belly Rules the Mind

This creamy cauliflower soup requires just five minutes of prep and comes together in no time thanks to the Instant Pot. Easy, delicious, and 100% vegan. via Recipes from a Pantry 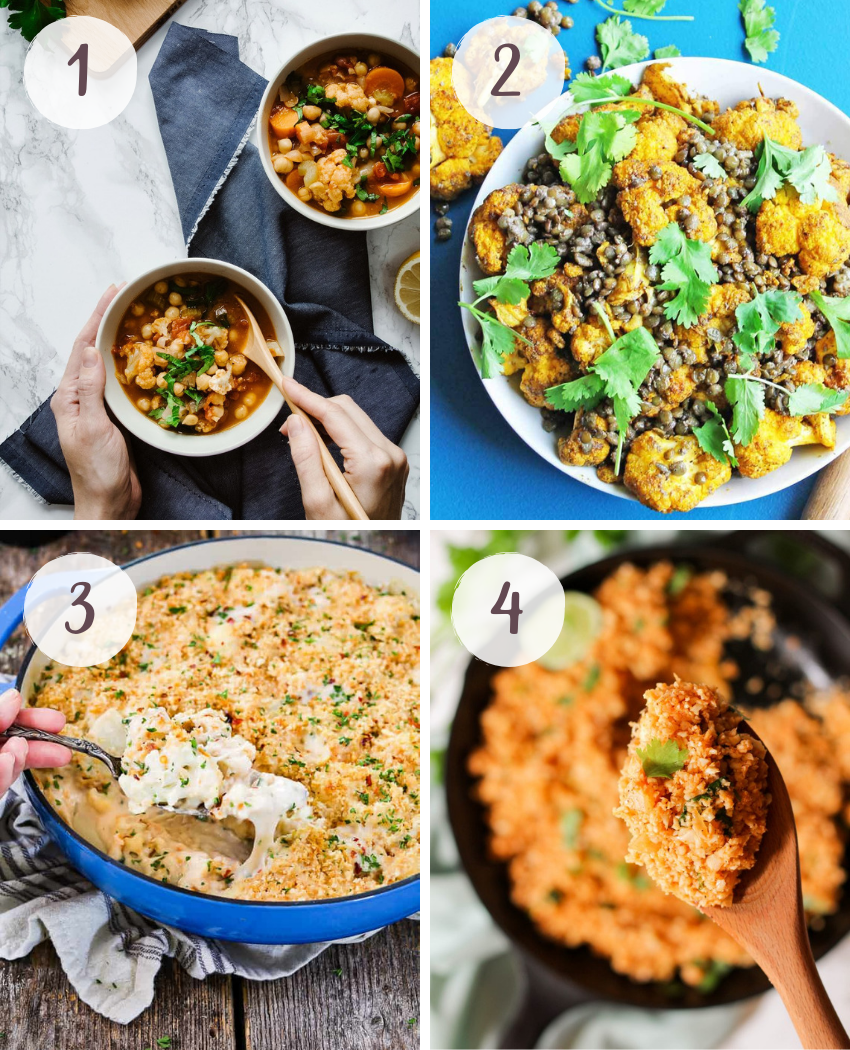 This soup is cozy, fragrant, and the perfect healthy comfort food. Loaded with vegetables, spices, and herbs, it’s the quintessential vegan soup to get you through chilly nights. via The Simple Green

This Indian-inspired vegan cauliflower recipe is spiced with garam masala, turmeric, and cumin. While the cauliflower roasts to golden bliss, green lentils combine with creamy coconut for a delectable accompaniment. via Rhubarbarians

Holy cheese, Batman! This vegan cauliflower casserole is crowned with crunchy breadcrumbs and baked until gooey, melty perfection. From the cheese pulls, it’s almost impossible to believe this dish is vegan. via Vegan Huggs

This cauliflower rice is not only vegan, but also paleo, Whole30, and Keto-friendly. Bonus: it’ll be on your table in about 20 minutes! via What Great Grandma Ate 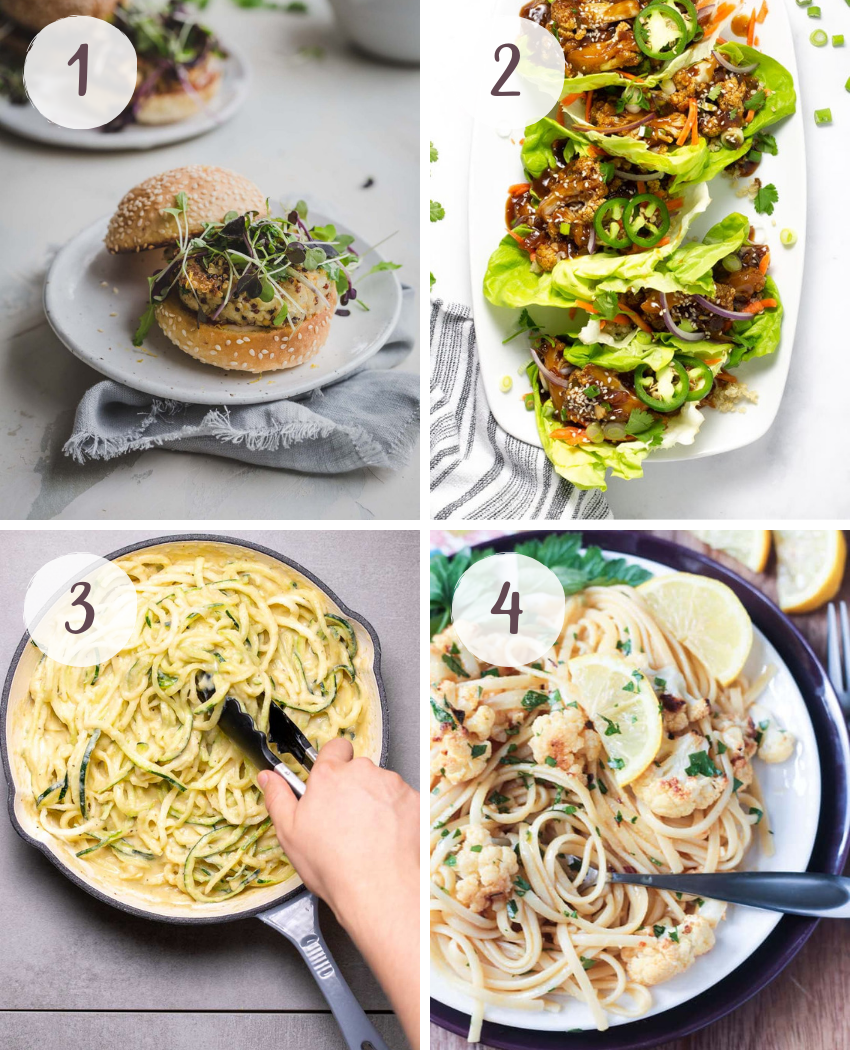 These tasty vegan burgers are loaded with fiber, antioxidants, and protein. The Sriracha sauce gives a spicy kick that perfectly complements the cauliflower. via My Goodness Kitchen

These Korean-inspired lettuce wraps are addictive. Roasted cauliflower is tossed in a sweet-and-spicy sauce before being stuffed into lettuce wraps and topped with all the fixin’s. via Midwest Foodie

It’s highly likely any vegan alfredo sauce is made from this all-star cruciferous veggie. This vegan alfredo is smooth, creamy, perfect for zoodles, and includes plenty of great tips. via Diabetes Strong

Move over shrimp, there’s a new scampi in town. This vegan cauliflower recipe has all the makings of a tasty scampi (wine, lemon, garlic) for an easy weeknight meal. via Veggie Inspired 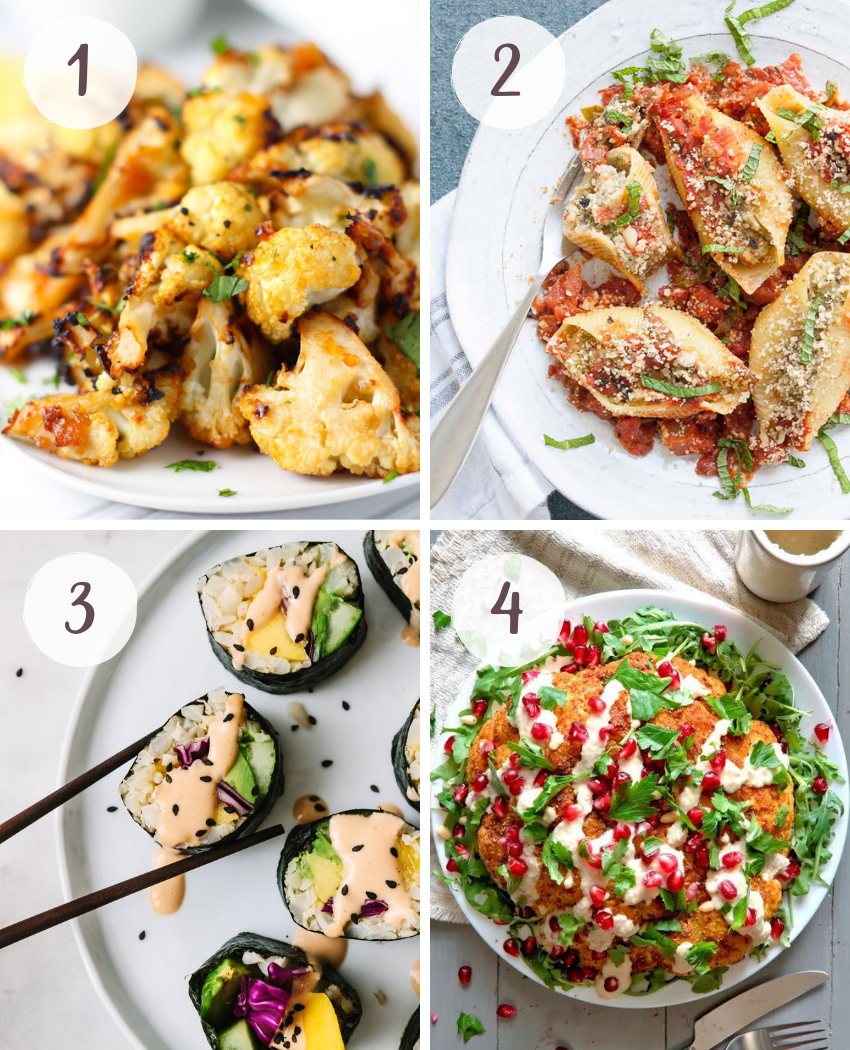 The combination of miso and cauliflower is the stuff of dreams. Erin notes that while this is a delicious side dish, you can also follow her lead and “eat the entire plate and call it dinner.” via Platings and Pairings

Is this the perfect no-cook summer meal, or what? These vegan and grain-free sushi rolls, topped with a spicy Dynamite Sauce, are as pretty as they are tasty. via Simple Veganista

There’s plenty of Pinterest-worthy whole roasted cauliflower recipes to go around. I dig this vegan, dairy-, and gluten-free version for its simplicity. It doesn’t hurt that it looks so pretty, either. via Cooking Journey 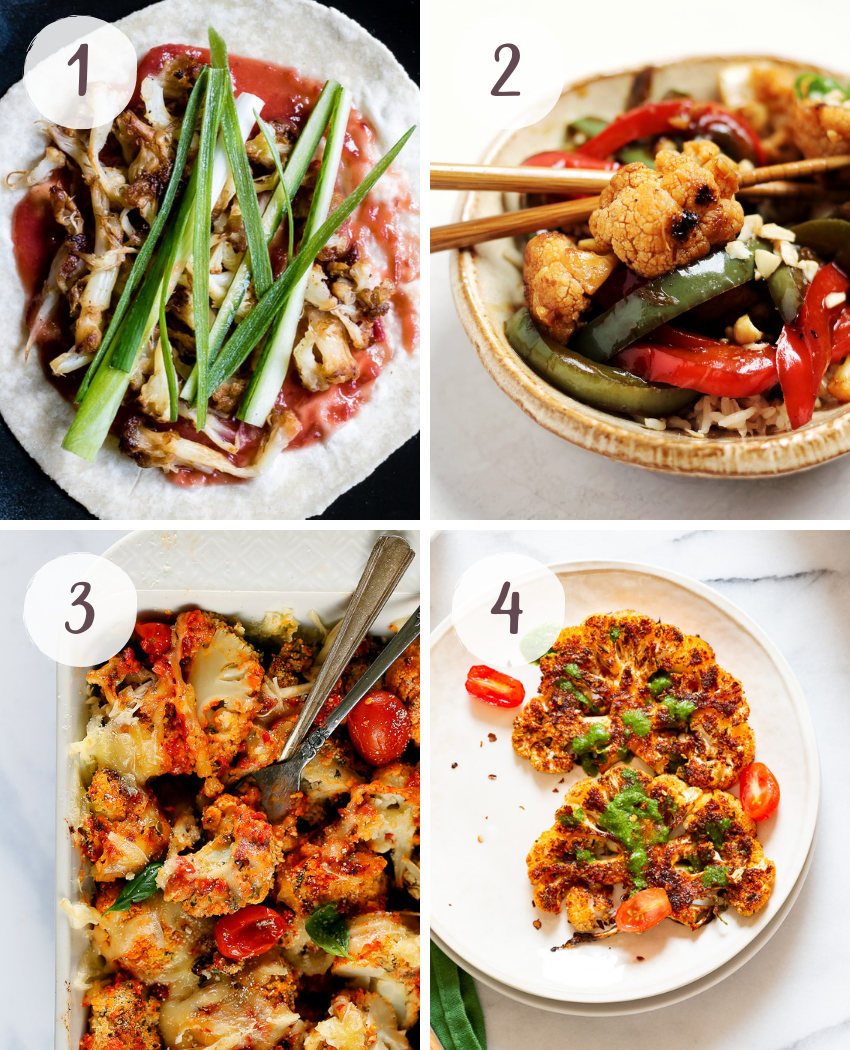 I could stare at this photo forever and still think this pancake is topped with meat, not cauliflower! The crispy, shredded “duck” cauliflower, sweet-and-savory plum sauce, and homemade pancakes makes this vegan cauliflower dish a real star. via Veggie Desserts

This dish is from my cookbook, The Modern Cast Iron Cookbook, and one of my favorite vegan cauliflower recipes ever. Plus, it’s crazy simple to make and on the table in 30 minutes. via Parsnips and Pastries

Move aside eggplant, there’s a new Parmigiana veggie in town. This Cauliflower Parmesan is 100% vegan comfort food goodness for a healthier take on a favorite. via Pasta-Based 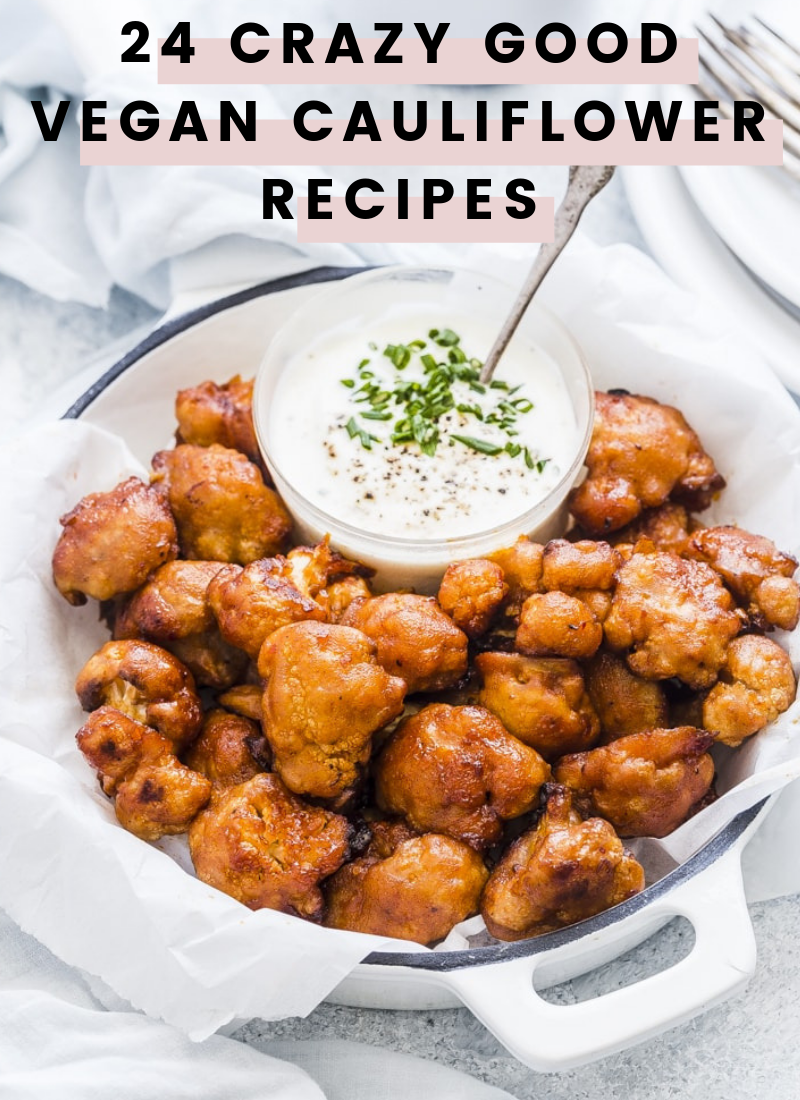 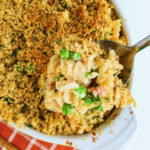 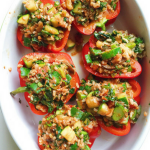 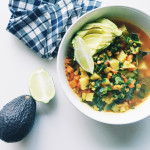 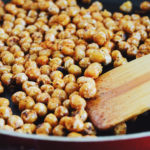 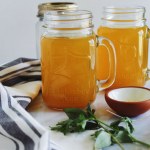 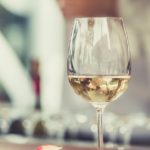 How to Pair Vegetarian Dishes with Wine